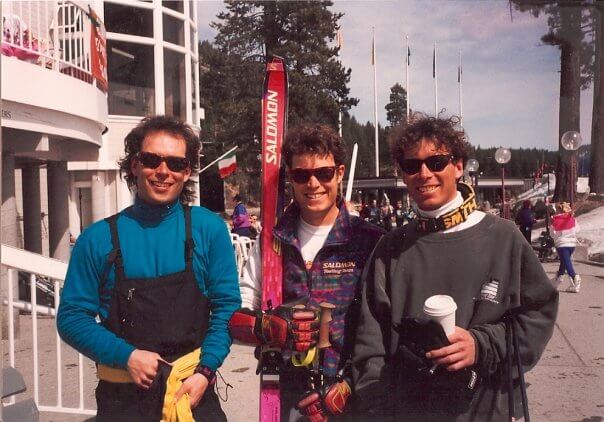 Many of you know our very own Adam DesLauriers as the Director of the burgeoning Bolton Valley Backcountry Program, but perhaps you didn’t know he had the opportunity to travel with his brothers Rob and Eric around the world and produce some (now) classic ski films along the way. Well, we’ve rounded up many of the people involved in filming Breathe and will present an abridged version of that film tonight (Wed 3/25/20) at 8pm on our Facebook Page with several of the contributors to the project (and other friends) weighing in live in the comment thread.

Tune in at 8pm tonight (3/25/20) to join the live discussion: Bolton Valley Facebook Page and here’s a little more back story from Adam’s perspective:

It was December, 1996 and I had just finished my final semester at UVM.  Having taken the previous couple of winter semesters off to live in Squaw Valley, California, I knew exactly what was happening next – I was loading up my ’82 Volvo wagon with everything I owned and then my wily North End Shepherd, Mick and I were headed to Cali!

That winter of ’96 – ’97 was also the first year that my 2 brothers, Rob and Eric would be producing a ski movie.   They’d been featured in a bunch of Warren Miller movies before that, and starred in the “North Face Extreme” series produced by Eric Perlman in the late ‘80’s and early ‘90’s, but this would be the first year they’d actually sought funding and would be producing a film themselves.  And this first year, they’d teamed up with Scott Gaffney (coming off the success of his awesome indie ski flick, “Walls of Freedom”) to make what would become BREATHE – which was officially the “director’s cut” of THE PROMISED LAND, which was presented by The North Face and Gore-Tex.

That winter really became the first year of the next phase of my education, which was basically, learning how to schlep gear, organize ski travel, operate a 16mm film camera, deal with corporate sponsors, and generally how to deal with being in and on significantly bigger mountains than I’d ever seen up close before.  I was the official grunt/gopher for the production of BREATHE/PROMISED LAND (Thank you Scott Gaffney for putting up with me).  I didn’t get paid a dime, but I got in front of the camera, and more awesomely, I got to travel and ski in some totally amazing places and learn a lot of stuff.

So, in filming this movie that we’re showing tonight – it was the first ski movie that I’d ever really been a part of producing, albeit a small, tiny part.  But it was also the first time I’d ever been to the Alps and the Chugach mountains – in that order.  And lemme tell ya… I was freakin’ GRIPPED.  Pretty much the entire time we were in Chamonix, I was scared to death.  I’d never seen that kind of exposure or vertical drop anywhere.  You could literally stand at the top of a pitch and look between your ski tips at the valley floor thousands of feet below you.  By the time we got to the Chugach a month later, I’d gotten a little more used to being on giant faces like that, but then you throw a helicopter in the mix and it got all kinds of freaky all over again.

But then, as soon as your skis are on and you settle into your first turn in that perfect maritime snow… it’s nothing but beautiful wonderful amazingness laid out in front of you.  And regardless of how many times I’d make it back to places like that in the following years, that was always the case, and I still get all goose-pimply thinking about it.  So… enjoy!  This’ll be a blast watching some of this stuff tonight.  And stay tuned for an abridged version of ALTITUDE afterward– which is the film we made the following year, with a special homage to Squaw Valley and Lake Tahoe and features a whole bunch of our best friends and oldest ski partners.

See you tonight at 8pm EST on the BV Facebook page!
Adam D.