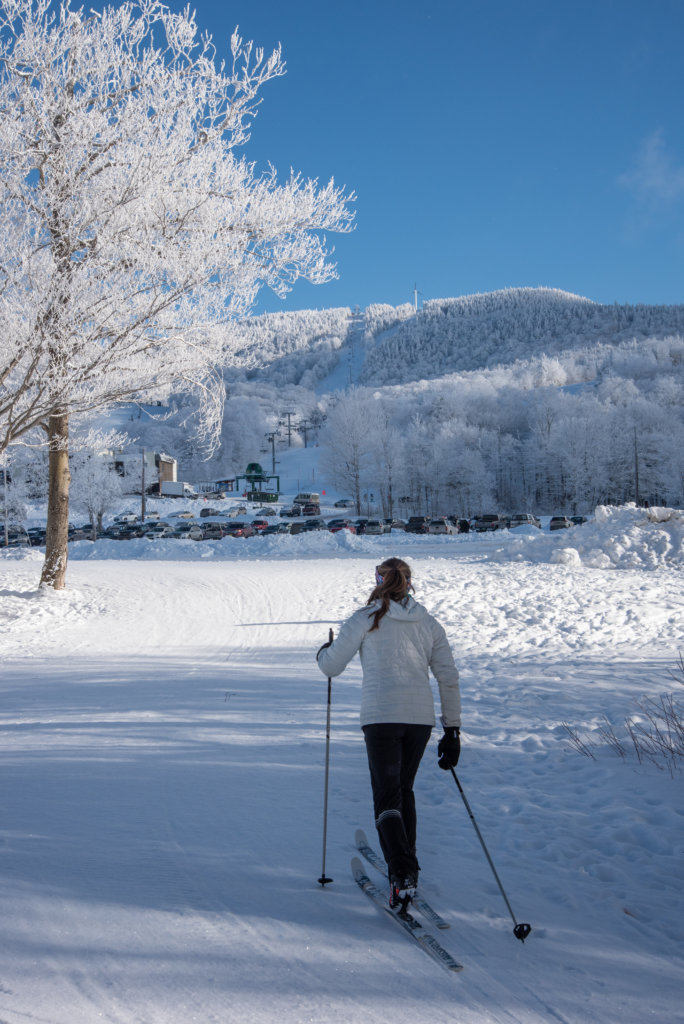 After 15 years of alpine skiing, I finally got to try the one form of skiing I’ve never done. I’ve downhill skied, alpine touring skied, and even telemark skied in those 15 years, but never once have I been on those old fashioned toothpicks people call Nordic Skis. It was a humbling experience, to say the least. How is someone supposed to go from being really good at having two long planks on your feet to acting as you’ve never slid on snow before?

I’ve worked at Bolton Valley for five years (four of them being a ski instructor) and never once have I been nordic skiing. So today, after five long years of shrugging the sport off, I marched down to the sports center and got a pair of rental nordic skis. Allee, one of the Nordic Instructors, showed me the basics and took me out around the picnic loop. Picnic Loop is a blue square trail and looking back, I should’ve started with a green but you live and you learn. It wasn’t that I could not do the blue Square but it was the fact that I was not ready to get my butt kicked so hard by a sport I had always shrugged off. I guess that’s karma for you.

We started to move and suddenly I was transported into one of my student’s shoes. It was uncomfortable and I was incredibly embarrassed by the lack of ability I possessed. I kept tripping over my own feet and had a hard time even getting into a rhyme of being able to move my skis forward.

After a few steps and finally getting into a rhythm where I sort of had the Nordic Ski motion down, we came up to a descend. Immediately knees got weak and palms got sweaty. I resorted to my skiing roots of quickly putting my skis in a wedge formation but it was no help with the lack of edges Nordic Skis had, I was going down the hill gaining speed every inch. By pure luck, I somehow stayed up on my whole two feet and made it down the hill still standing.

After getting into a decent rhythm and being able to experience a few more ups and downs, I finally was able to get the hang of at least gliding flats and downs, and also being able to walk up hills. It wasn’t until I saw the end of loop that I popped my skis into the Classic Tracks (Machine groomed two straight tracks to use to keep your skis straight) that I took a tumble.

All in all, I had a fun time. It was a lot more fun than I originally thought it was going to be. It was also incredibly humbling to be a beginner again. I can’t remember the last time that I tried something new and I’m so glad that I did.

Picnic Loop is a blue Square that has a few ups and downs but is a solid option for those who can glide on snow and make a wedge using their nordic skis.

If you are interested in learning how to nordic ski click HERE. We offer lessons and rentals daily.